Myth: In the press release announcing the resolution, Senator Warren says beef companies have lowered wages for workers. This assertion is completely false.

Fact: The meat and poultry industry values its workforce and, according to Rabobank and other well documented sources, average starting hourly wages for workers have increased from $14.60 to $22.00 an hour in just three years. In fact, the CEOs of Tyson and JBS recently testified before the House Agriculture Committee about workforce wages. At JBS beef facilities, average pay is nearly $24.00 an hour and starting wages are $20.00 an hour, representing a 40 percent increase since 2017. At Tyson, average compensation is $24.00 an hour or $50,000 a year. Tyson Foods testified to spending $500 million on pandemic wage increases. 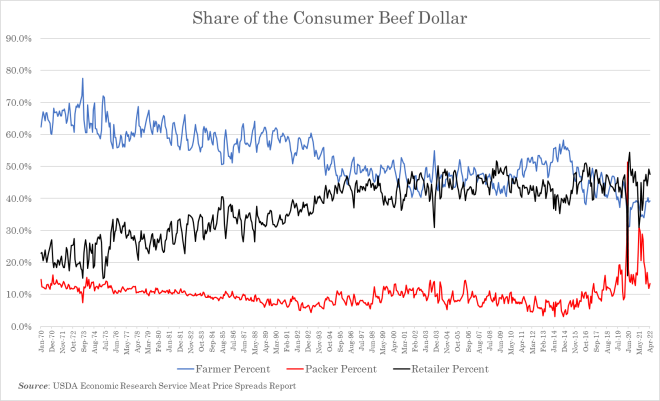 Myth : From the resolution: Whereas, each year since 1980, an average of nearly 17,000 cattle ranchers have gone out of business;

Fact : Every five years, USDA’s Census of Agriculture collects data on agriculture and livestock production and sales. According to the 1982 Census (the closest Census to the cited year of 1980) there were 671,702 cattle farms and ranches on which there was an end-of-the-year inventory of beef breeding cows – a necessary asset to consistently produce calves to be marketed – from which cattle and calves actually were sold. (1982 Census of Agriculture, Table 26, p 14) For context, this number includes all operations with at least one cow; in fact, 102,892 of those farms had four or fewer cows. 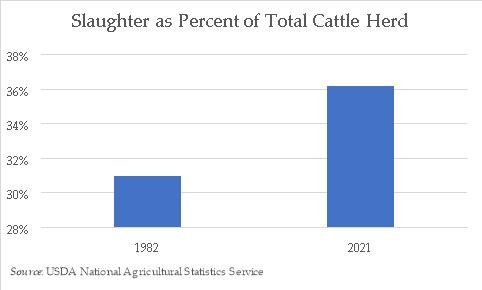 Myth : From the resolution: Whereas, between 2015 and 2018, the difference between the cost of wholesale beef and the price paid to ranchers increased by 60 percent, while the top beef packers enjoyed record profits;

Fact : Cattle prices were at record highs in 2014 and 2015 when the overall cattle herd was at its smallest since 1952 (i.e., during the Truman Administration). Those record prices incentivized rapid herd expansion among producers until the beginning-of-the-year cattle inventory in the U.S. hit its peak in January 2019. This pendulum-swing resulted in an imbalance in cattle supply and demand impacting both beef and cattle prices and further caused volatility for all sectors – cow-calf producer, feedlot, and beef packer. There are different supply and demand forces on cow-calf producers, feeders, packers, and retailers, which is why each sector can experience different market effects at the same time.

Cattle and beef markets are extremely complex. From the ranch to the slaughter plant, live cattle typically change ownership two to three times. Consider, cow/calf producers market their calves to cattle feeders, or to “backgrounders” who in turn sell those cattle to feeders. Those cattle are then sold to packers. Price at any given point in this value chain is determined by the supply of cattle to sell from one segment and the demand to buy cattle by the next segment. Then, each step in the post-slaughter process that is carried out by a variety of entities, is taken to add value and provide specific products for specific uses in various consumer markets – both retail grocery and food service, which vary significantly in product type and specifications.

To sum up this complexity, a recent paper published by the Federal Reserve Bank of Kansas City notes that one animal – and the beef produced from it – “could be sold as many as six times before it finally reaches the consumer.” (Cowley, C. Long-Term Pressures and Prospects for the U.S. Cattle Industry, Kansas City Federal Reserve Bank Economic Review, December 17, 2021) In short, there are different supply and demand forces on cow-calf producers, feeders, packers, retailers and restaurants, which is why each sector can experience different market forces at the same time. 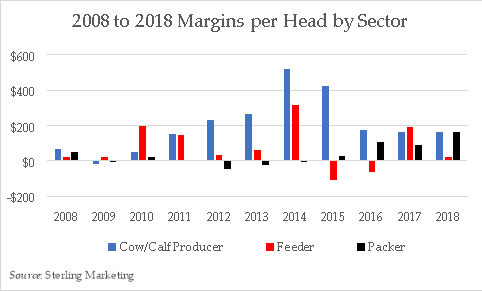 Cattle markets are famously cyclical. Looking back over 10 years, instead of the 3 referenced by the resolution, shows this in context.

No sector – cow-calf, feedlot, nor packer – has realized positive margins every year, however, over the cow-calf sector suffered negative margins the fewest number of years of the three as the chart above shows, and the packing sector has experienced the most.

Myth : From the resolution: Whereas the top 4 beef packers increased their market share from 32 percent to 85 percent in the past 3 decades; 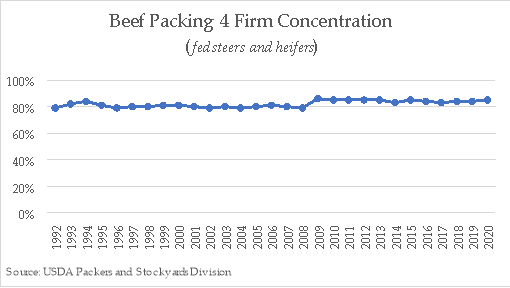 Myth : From the resolution: Whereas the top 4 beef packers control roughly 85 percent of the beef supply to the wholesale market in the United States;

Fact : Again, this is not the case, and is a misleading exaggeration. Fed cattle make up 79 percent of the total cattle slaughter. Cows and other non-fed cattle, make up the balance, primarily slaughtered to be made into hamburger. The lean meat from these animals is a necessary ingredient to be made into America’s supply of hamburger produced in combination with the less demanded muscle cuts from the fed cattle. This distinction is important because up to 50 percent of all beef in the U.S. is consumed as hamburger. Even factoring in the non-fed cattle slaughter plants they own, the four largest beef packers represent about 70 percent of total U.S. beef production.

About North American Meat Institute
The Meat Institute is the United States’ oldest and largest trade association representing packers and processors of beef, pork, lamb, veal, turkey, and processed meat products. NAMI members include over 350 meat packing and processing companies, the majority of which have fewer than 100 employees, and account for over 95 percent of the United States’ output of meat and 70 percent of turkey production.