“The analysis of beef and cattle market margins from 2015 are not in dispute,” said Julie Anna Potts, President and CEO of the Meat Institute. “Cattle prices hit record highs in 2014 and 2015, when the overall cattle herd was at its smallest since 1952 (for context, that was during the Truman Administration). Those record prices incentivized rapid herd expansion among producers. 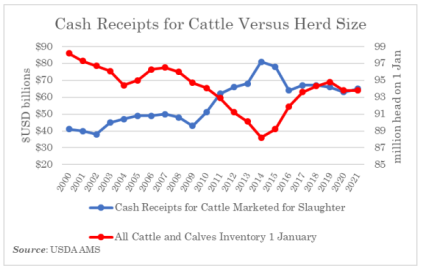 “While the beginning-of-the-year cattle inventory in the U.S. hit its peak in 2019, given the time needed to raise a calf to market weight, the supply of feeder cattle in the herd on the first of the year did not peak until January 2020. Total feeder cattle supply began 2020 at the highest level in more than a decade. 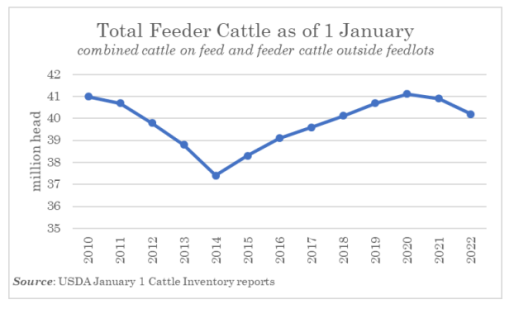 “Two and a half months later, in March 2020, COVID hit. Slaughter plants were idled beginning in April. By the week ending May 1, 2020, weekly slaughter dropped by 40 percent and didn’t recover until late June, but still lagged behind what would have been normal volumes during the season.

“If Chairman Scott wishes to consider the entire beef supply chain from beginning to end, he should consider the margins for producers as well. No sector – cow-calf, feedlot, nor packer – has realized positive margins every year. For example, the four-firm concentration ratio in 2014, when cow-calf and feedlot margins were at record highs, was the same as in 2017 when all three sectors showed positive margins. In fact, the four firm ratio has not changed appreciably since 1994. However, over this more than 25-year timeline, the cow-calf sector suffered negative margins the fewest number of years of the three as the chart below shows.” 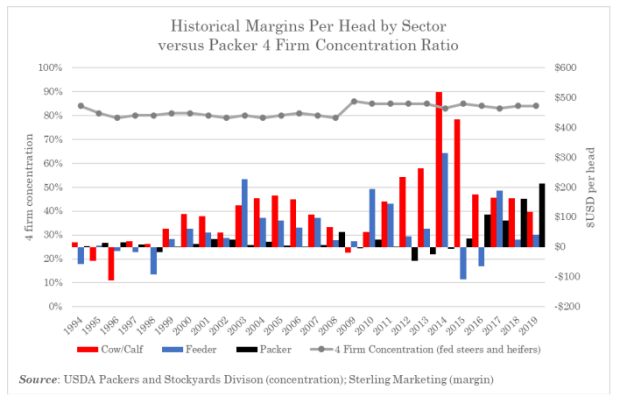 About North American Meat Institute
The Meat Institute is the United States’ oldest and largest trade association representing packers and processors of beef, pork, lamb, veal, turkey, and processed meat products. NAMI members include more than 350 meat packing and processing companies, the majority of which have fewer than 100 employees, and account for more than 95 percent of the United States’ output of meat and 70 percent of turkey production.